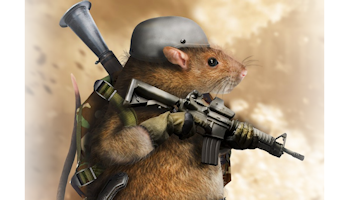 
“It goes without saying that secret services were conducting scientific researches of so-called “rat weapons.” The USSR used it during WWII against Friedrich von Paulus’s army. The Soviet government did not risk to infect fascists with plague or ulcer – they chose tularemia. Rats spread the disease in German troops very quickly. The effect was astonishing: Paulus had to take a break in his offensive on Stalingrad. According to archive documents, about 50 percent of German prisoners, who were taken captive after the battle of Stalingrad, were suffering from classic symptoms of tularemia. Unfortunately, every action leads to a counteraction. The use of infected rats against the Nazi army had an inverse effect too: the disease came over the front line, and infected a lot of Soviet soldiers.”


During World War II, Joseph Stalin was forced to move his biological warfare (BW) operations out of the path of advancing German forces & may have used tularemia against German troops in 1942 near Stalingrad.
Soviet biological weapons program – Wikipedia https://en.wikipedia.org/wiki/Soviet_biological_weapons_program