Covid-19 has not become less deadly, according to research that rubbishes claims the life-threatening disease has weakened over time.

Scientific theory suggests viruses may lose potency in a bid to survive — if they kill or cripple all their human hosts they will run out of road.

But Italian scientists who tracked the outbreak between March and the start of May say that there is no evidence the coronavirus poses less of a threat.

Around 9.5 per cent of infected patients (157 of 1,658) who were hospitalised in the provinces of Ferrara and Pescara in March died.

But academics implied the rate was down to patients being slightly older, skewing the results to make it seem like the virus had actually became more aggressive.

The average age of those who died was 78 in March but rose to 84 in April. Experts did not explain why this may have been. 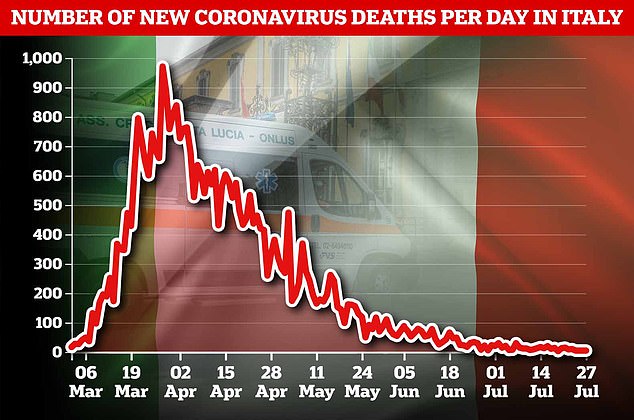 Coronavirus has not become less deadly over time, contrary to recent suggestions, a new study in Italy has claimed

The study, carried out by experts at various universities and hospitals across Italy, was not published in a medical journal.

Instead, it was printed on medRxiv — a site which distributes unpublished studies that have not yet been peer reviewed by fellow scientists.

All of the 2,400 coronavirus patients who were studied had tested positive for the virus in hospital, suggesting they had a severe bout of the disease.

Tens of thousands of patients, often the young and healthy, escape without ever showing symptoms — meaning they are often missed in official counts.

It is, for this reason, that the case-fatality ratio — how many people die after testing positive — of around 15 per cent in Britain is an inaccurate measure.

Infectious disease experts who have tracked the pandemic since it began in Wuhan in December say the mortality rate is likely to be under 1 per cent.

HOW AND WHY CAN VIRUSES LOSE POTENCY OVER TIME?

Viruses are known to change over time because they are subject to random genetic mutations in the same way that all living things are.

These mutations can have various effects and many will only happen briefly and not become a permanent change as newer generations of viruses replace the mutated ones.

However, some of the mutations might turn out to be advantageous to the virus, and get carried forward into future generations.

For example, if a virus becomes less dangerous to its host – that is, it causes fewer symptoms or less death – it may find that it is able to live longer and reproduce more.

As a result, more of these less dangerous viruses are produced and they may go on to spread more effectively than the more dangerous versions, which could be stamped out by medication because more people realise they are ill, for example.

The mutation may then be taken forward in the stronger generations and become the dominant version of the virus.

In an explanation of an scientific study about HIV, the NHS said in 2014: ‘The optimal evolutionary strategy for a virus is to be infectious (so it creates more copies of itself) but non-lethal (so its host population doesn’t die out).

‘The “poster boy” for successful long-living viruses is, arguably, the family of viruses that cause the, which has existed for thousands of years.’

This would still make it much deadlier than the seasonal flu, which kills around 0.1 per cent of all people it strikes, but less deadly than SARS.

The new study did not take into account all cases in the environment, meaning it could be the case that the virus has still become weaker.

For instance, the researchers did not look at how many patients were hospitalised out of those who tested positive — which may offer some clues to whether the virus has become more aggressive.

Studies that look at death rates may also hit stumbling blocks, if they are carried out outside of hospital.

Increased testing figures could skew case-fatality rates and make it impossible to tell if the virus has become weaker or stronger.

Writing in the pre-print paper, the experts said: ‘Our data do not support the hypothesis of a decline in SARS-CoV-2 lethality.’

The study even found the lethality of the disease actually increased among men — disputing claims that the SARS-CoV-2 virus has started to become weaker.

Italy was hard hit by Covid-19 in February and March and saw cases skyrocket. The country now has 233,197 confirmed cases and 33,475 deaths.

The number of infections in the country has steadily declined since March 21 where it saw 6,557 cases. Yesterday there were just 254.

And the death toll as declined in a similar manner since March 28, which saw 971 deaths. Yesterday there were just five.

The Covid-19 outbreak in Italy started in February in Lombardy. The government put the region into lockdown and extended it throughout the country two days later.

Around 9.9 per cent of male patients died in March, compared to a startling 15.8 per cent in April. The rate barely changed in women.

Covid-19 death rates in people who were seemingly healthy — without a high-risk ailment such as high blood pressure — also increased between March and April.

Just 4.4 per cent of patients who didn’t have hypertension died in March. For comparison, the rate rose to 6.7 per cent in April.

The research directly conflicts with recent suggestions from health experts in Italy who have suggested that the virus is not as fatal as it used to be.

Italian health expert and the head of San Rafaelle Hospital in Milan, Alberto Zangrillo, claimed in May that ‘the virus clinically no longer exists in Italy’.

He suggested the interaction between the virus and its human host had changed and it was no longer replicating at such a rapid rate inside the body.

Professor Alberto Zangrillo made the claim to the RAI TV channel, saying: ‘In reality, the virus clinically no longer exists in Italy.’

He said swabs taken from patients during the past 10 days had an ‘infinitesimal’ — extremely small — viral load, compared to ones carried out the month before.

The viral load is the quantity of virus that is detected in someone’s swab sample — a greater load has been associated with worse symptoms.

His comments were controversial, and the Italian government urged caution over the claims. But they were quickly supported by other doctors.

The head of the infectious diseases clinic at the San Martino Hospital in Genoa told reporters that he was also seeing the virus weaken.

He told ANSA news agency: ‘The strength the virus had two months ago is not the same strength it has today. It is clear that today the Covid-19 disease is different.’

‘The concentration of viral RNA on the swab is so small that it does not infect anything,’ Giuseppe Remuzzi, one of the op-ed co-authors, told Politico last week.

But other virologists have cast doubt on the Italian doctors’ claims, saying there is no evidence the virus is losing potency anywhere. One called them ‘bulls***’.

Experts led by a team at the University of Ferrara did not look at the viral load of the patients to back up the claims, however.

Viruses known to have mutated in this way, such as HIV and the common cold, have been around for decades and thousands of years, respectively.

But the coronavirus was only spotted in humans in December last year, meaning it is still shrouded in mystery.