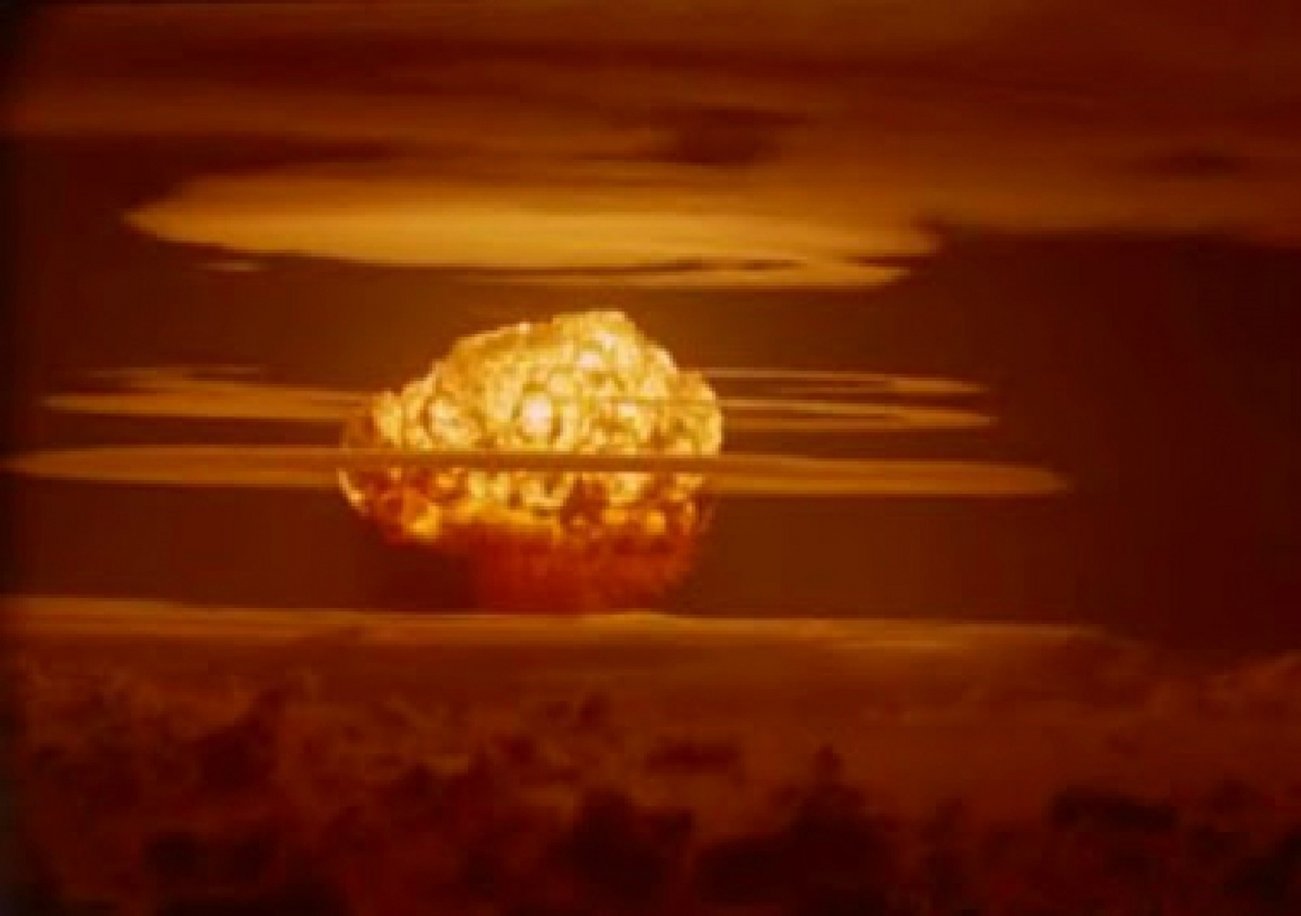 Not all nuclear tests are created equal.

Here’s What You Need To Remember: With better targeting and accuracy—along with some countries like the United States adopting counterforce rather than countervalue doctrines—gigantic nuclear yields like Castle Bravo and Tsar Bomba are no longer needed and probably never were. Today the most powerful American nuclear warhead is believed to be the B83, with a yield of 1.2 Mt. Even that bomb is in the process of being retired.

These days, the phrase nuclear test is almost synonymous with North Korea. After all, Pyongyang has conducted several nuclear tests since its first one in 2006. No other country has conducted a single test this century.

In the grand scheme of things, however, North Korea is barely a blimp on the map. Between America’s first nuclear test in 1945 and North Korea’s last denotation in September of last year, the world has witnessed at least 2,056 nuclear tests. Nearly 85 percent of these were conducted by the United States and the Soviet Union, but the three other recognized nuclear powers (the United Kingdom, France and China) have also conducted a significant amount of their own. Israel has never officially tested a nuclear weapon, although there is strong evidence that it secretly tested some in South Africa in 1979. India conducted a “peaceful” nuclear explosion in 1974, followed by a series of five nuclear blasts in May 1998. Later that same month, Pakistan responded with six nuclear tests on two seperate days.

Not all nuclear tests are created equal though. Some blasts produce yields of tens or hundreds of tons of TNT equivalent, while others have measured in the tens of megatons (a megaton is equal to a million of tons). Variance is greatest among the two Cold War superpowers, but the United Kingdom, France, China and North Korea have also had some significantly different yields in their nuclear tests. With that in mind, let’s look at the biggest nuclear blasts of each of these countries.

The United States has the distinction of both conducting the first and most nuclear weapons tests in history. Washington memorably conducted its first nuclear test, the Trinity, in the New Mexico desert on July 16, 1945. Upon witnessing the blast, which measured in at twenty kilotons (20,000 tons of TNT equivalent), Dr. J. Robert Oppenheimer famously declared, “Now I am become death, destroyer of worlds.”

America was just getting started. Between the 1945 and 1992, the United States conducted 1,030 nuclear tests, nearly half of the world’s total. Its largest one came just nine years after the Trinity test on March 1, 1954 at the Bikini Atoll in the Marshall Islands. The Castle Bravo design used was intended to be the first deliverable thermonuclear weapon after the United States had first tested a hydrogen bomb in 1952.

Castle Bravo turned into a major catastrophe. While the designers were expecting a yield in the range of 5–6 megatons, the resulting blast was an incredible fifteen megatons. That is roughly 1,000 times more powerful than the bombs used against Japan in World War II. The resulting fallout quickly turned into an international disaster for the United States, as the radiation spread out over roughly 7,000 square miles, according to some sources. Perhaps most notably, a Japanese fishing boat, Lucky Dragon No. 5, happened to be in the area and twenty-three of its crew members would die in short order due to radiation poisoning.

The test also brought the danger of the nuclear era into sharp relief for United States and other world policymakers. After the test, President Dwight D. Eisenhower’s science advisers superimposed the fallout patterns of the Castle Bravo test on a map with Washington, DC as ground zero. The results were shocking. As Annie Jacobsen recounts in her fantastic book on the history of DARPA:

If ground zero had been Washington, D.C…. every resident of the greater Washington-Baltimore area would now be dead…. Even in Philadelphia, 150 miles away, the majority of inhabitants would have been exposed to radiation levels that would have killed them within the hour. In New York City, 225 miles north, half of the population would have died by nightfall. All the way to the Canadian border, inhabitants would have been exposed to 100 roentgens or more, their suffering similar to what the fisherman on the Lucky Dragon had endured.

None bigger than Tsar Bomba. On October 30, 1961, a specially modified Tu-95 bomber took off carrying a bomb that was twenty-six feet long and seven feet wide, weighing in at twenty-seven tons. After the bomber dropped Tsar Bomba, it floated down on a one-ton parachute before detonating at 13,000 feet above the ground. The resulting explosion produced a yield of fifty-seven megatons, which was “10 times more powerful than all the munitions expended during World War Two.” As the BBC would later report, “The flash could be seen from 1,000 km (630 miles) away. The bomb’s mushroom cloud soared to 64 km (40 miles) high, with its cap spreading outwards until it stretched nearly 100 km (63 miles) from end to end.” According to some accounts, the blast broke windows that were 560 miles away.

The United Kingdom was the third country to join the nuclear club, detonating its first atomic bomb on October 3, 1952. Britain was the first of the secondary nuclear powers, all of which displayed noticeably different nuclear habits than the superpowers. For one thing, Britain and the other countries (France, China, India, Pakistan and Israel) had much smaller arsenals than the United States or Soviet Union. The secondary nuclear countries also didn’t conduct as many nuclear tests as Washington and Moscow.

For its part, Britain conducted forty-five nuclear tests between 1952 and 1991. At first, London tested nuclear devices on its own. Starting in 1961, its nuclear tests were done jointly with the United States. Washington refused to cooperate with the United Kingdom on most nuclear issues until Britain had demonstrated its ability to build hydrogen weapons. London started testing thermonuclear bombs in 1957 but initial designs didn’t produce the expected yield. The first successful hydrogen bomb test occured in November 1957 but Britain’s largest thermonuclear bomb test proved to be Grapple Y in November 1958. It produced a yield of three megatons.

France was the fourth country to test a nuclear weapon on February 13, 1960. As noted above, France’s nuclear habits were far closer to Britain than the superpowers. Where France differed from England was in not establishing as close of relations with the United States in the nuclear realm.

China broke the Western monopoly on nuclear weapons when it exploded an atomic bomb on October 16, 1964 at the Lop Nur test site. In less than three years, on June 17, 1967, Beijing claimed it had conducted a thermonuclear test. This was the fastest any country went from exploding its first atomic bomb to its first hydrogen one, and the latter produced a yield of 3.3 Mt.

China never went much higher than that in other nuclear tests. The one exception was in 1976, when China detonated an air-dropped bomb with a four-megaton yield. Overall, Beijing would conduct forty-five nuclear tests—the same number as Britain—between 1964 and 1996.

Of course, North Korea is the most recent country to join the nuclear club after exploding its first atomic bomb in 2006. That first test produced a yield of at most two kilotons. Pyongyang’s first four nuclear tests did not reach a twenty-kiloton-yield, but its fifth one might have gone as high as twenty-five kilotons. Its most recent nuclear test was quite clearly its most powerful. Its exact yield is still a matter of dispute, with estimates ranging from 100–250 kt. There are also differing opinions about whether North Korea tested a hydrogen bomb—as Pyongyang itself claims—or rather a boosted fission bomb. Since this test, in 2017, North Korea claimed once again to have tested a hydrogen bomb.

The mammoth nuclear bombs that the United States and Soviet Union tested in the beginning of the Cold War are likely to remain a relic of the past. At that time, nuclear strategy was still in its infancy, and largely predicated on targeting cities. Moreover, as the second World War had shown, accuracy from planes was absolutely horrendous (the same was true for early missiles), meaning an enormous blast was required to take out any specific targets. With better targeting and accuracy—along with some countries like the United States adopting counterforce rather than countervalue doctrines—gigantic nuclear yields like Castle Bravo and Tsar Bomba are no longer needed and probably never were. Today the most powerful American nuclear warhead is believed to be the B83, with a yield of 1.2 Mt. Even that bomb is in the process of being retired.

Zachary Keck (@ZacharyKeck) is a former managing editor of The National Interest. This article first appeared in 2018.