The idea of an insurrection is unheard of in modern US history, and the possibility that lawmakers or allies inside the Capitol were helping only contributes to the uncertainty and worry about the event and what’s to come.

At least one protest organizer said he coordinated with three House Republicans. There are unverified accusations of a “reconnaissance” mission one day before the attack. And more than a dozen US Capitol Police officers

are under internal investigation

While President Donald Trump’s role in inciting the violence is clear, there are some early indications and accusations that other insiders may have more actively aided the mob.

Ali Alexander, a right-wing conspiracy theorist who led one of the “Stop The Steal” groups,

claimed in a livestream video

that he planned the rally that preceded the riot with three GOP lawmakers: Reps. Paul Gosar and Andy Biggs of Arizona, and Rep. Mo Brooks of Alabama.

Brooks spoke at the rally before Trump took the stage, and urged the crowd to “start taking down names and kicking ass.” In a

about his involvement, Brooks said he was only telling the crowd to fight back at the ballot box. (Brooks also revealed that a White House official called him one day earlier and invited him to speak at the rally.)

CNN previously reported that Gosar associated himself with Alexander’s group in recent months. A spokesman for Biggs told CNN that he hasn’t ever met or worked with Alexander.

Alexander said he hoped his “mob” would pressure lawmakers to block President-elect Joe Biden’s victory through the Electoral College. After the riot was quelled, the three lawmakers voted to throw out Biden’s electoral votes from Arizona and Pennsylvania. Their effort failed.

“Those three members of Congress are going to need to lawyer up, very fast,” former GOP Rep. Charlie Dent, a CNN contributor, told CNN’s Erin Burnett on Wednesday, adding that he thinks the lawmakers will face scrutiny from federal prosecutors and the House Ethics Committee. 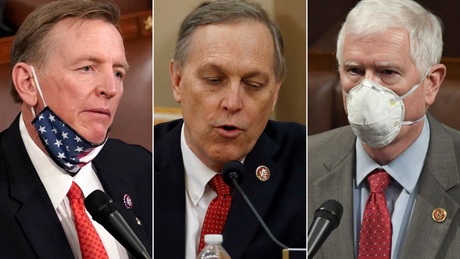 Rep. Mikie Sherrill, a New Jersey Democrat, made waves Tuesday night when she

unnamed Republican lawmakers of helping rioters by bringing them into the Capitol one day earlier for a “reconnaissance” mission of sorts. CNN has not yet verified those allegations.

Sherrill said there were “members of Congress who had groups coming through the Capitol that I saw on January 5th for reconnaissance for the next day.” CNN has repeatedly asked Sherrill’s office for details about her accusation, but they have not provided any additional information.

She is a former Navy helicopter pilot and federal prosecutor, and is seen as a moderate member of the Democratic caucus, and not a firebrand who would make accusations without merit. She said Wednesday that she was “requesting an investigation” with “certain agencies,” presumably to look into possible coordination between Republican lawmakers and rioters.

Separately, Republican Rep. Lauren Boebert of Colorado was criticized for

about House Speaker Nancy Pelosi’s whereabouts while the attack unfolded. Boebert, who is affiliated with the QAnon movement and regularly spreads right-wing conspiracy theories, tweeted that Pelosi had been “removed from the (House) chambers” while rioters were still in the building. 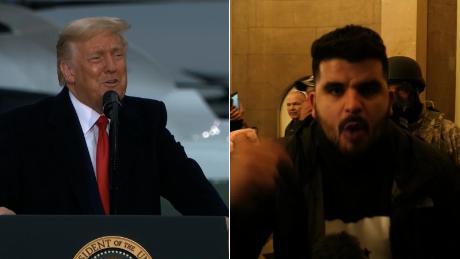 See how Trump’s language was echoed by rioters

More than 70 people have already been charged with federal crimes related to the attack. Most of the publicly disclosed cases involve people who fought with police officers inside the Capitol, made violent threats against Democrats, or were found near the complex with guns or bombs.

Prosecutors haven’t yet accused any of those Trump supporters of coordinating with Republican lawmakers or sympathetic police officers, but the massive investigation is

still in its early stages

“We’re looking at significant felony cases tied to sedition and conspiracy,” Michael Sherwin, the acting US attorney for Washington, DC, told reporters on Tuesday, without specifically saying whether any lawmakers or members of law enforcement were under investigation.

But Sherwin added, “Our office organized a strike force of very senior national security prosecutors and public corruption prosecutors. Their only marching orders from me are to build seditious and conspiracy charges related to the most heinous acts that occurred in the Capitol.”

Insider help from police and military

At least two US Capitol Police officers have already been suspended, and at least 10 more are under investigation, for allegedly playing some sort of role in the insurrection,

There was immediate speculation after the attack that some sympathetic police officers may have helped the rioters, given the fact that the raucous and at-times violent crowd seemed to mill about the Capitol complex with little resistance. One rioter even

posed for a selfie

participated in the insurrection

, according to news reports and court records. One of the men who infiltrated the Senate floor during the attack is a retired Air Force lieutenant colonel, and the Army is

one psychological operations officer who led a group of North Carolinians to the Trump rally before the attack.

Ashli Babbitt, the 35-year-old woman who was

while trying to breach the House chamber, was an Air Force veteran who later became consumed by conspiracy theories.

CNN’s Daniella Diaz and Annie Grayer contributed to this story.